Paternity, or parentage, cases will identify who is or who is not the father of a child who is born out of wedlock. When one party contests the paternity allegations in a petition, DNA testing is generally completed. For instance, the putative (or alleged) father in a paternity action may require proof that he is the child’s father before he consents to payment of support. In other cases, the mother may contest the putative father‘s paternity when a man attempts to gain custody of or visitation with a child he believes to be his. If the parties agree, the putative father may sign a voluntarily acknowledgement of paternity in Court.

Paternity may also be established by circumstantial evidence, such as when a man takes the child into his home and holds the child out to the public as his own. A married man is presumed to be the father of a baby born to his wife during or shortly after their marriage.

The attorneys at Cartwright Law believe that children need loving fathers. They are critical to the child‘s development. The identification of a child‘s biological father gives parents the opportunity to love and support their child—both financially and emotionally. It also gives your child an opportunity to develop a relationship with both parents. You and your family deserve it. 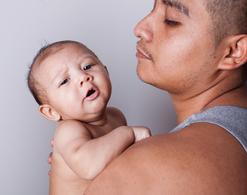